How content marketing drove one hospital’s web traffic from 8,000 to 4 million visits per month – in just 40 months!

When Amanda speaks, she doesn’t exactly command the stage. Don’t get me wrong - she’s perfectly comfortable up there - but she comes across as a very normal girl really, nothing remarkable about her at all.

But when you listen to her describe what they have done at the Cleveland Clinic through content marketing, your jaw drops just a little. Well, mine did anyway!

The Cleveland Clinic may not be wild about me referring to them as a mere ‘hospital’. They are a $6.2 billion enterprise employing over 43,000 caregivers.

To us folk over here in l’il ole Ireland, those are serious numbers, and let’s face it, beyond what an Irish hospital could achieve with our population base. However, their story must hold some relevance to our medical facility marketing community, no? In fact, to our marketing community in general. In fact, if the average Irish Marketing Director felt he or she could deliver a growth level that was even a small fraction of that rate, they’d be biting your arm off. Bite away, baby!

When they set out, it was with the objective of building a trusted brand at local, regional, national and international levels. Think Mayo Clinic. They were operating in a business where you cannot create demand. People are either sick or they are not.

Their strategy was to engage users in daily conversation using health, wellness and clinical content that was unique to the Cleveland Clinic. Their initial challenges were to find and create enough content, get support from the marketing teams, getting physicians on board and building the site. 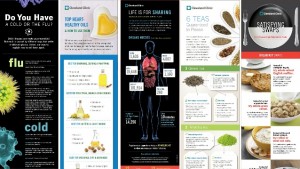 Within a year, they figured they were onto something in creating fresh, original content. They started posting more on social media, invested in growing audiences, amplification (including Outbrain) and their own team. They even launched efforts at syndication as some brands asked them to use their content.

It’s all about the reader 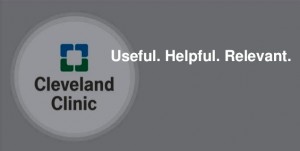 Their guardrail was ‘Useful. Helpful. Relevant.’ It was all about the reader, with 60% of their content being about preventing the reader getting sick (!) and healthy recipes. They didn’t even include phone numbers. They learned to say no to topics that were dense.

Infographics that take the pee 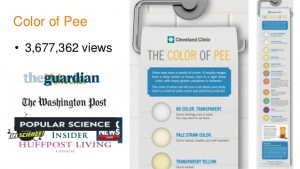 They had some notable individual successes including an infographic on ‘The Colour of Pee’ (they agonised over using the word!) which garnered 3.67 million views and they featured in the Guardian, Washington Post and Huffington Post.

In 2014 they produced 150 infographics and a lot of stuff on healthy food as the momentum continued to grow. They achieved 1 million facebook followers and 13 million visitors as they continued to invest in the things that had brought them success. They had Physicians coming to their team looking to get their material in!

Out with silos, in with integrated teams

They reorganised their team and how they work as they went. From a small team working in silos (Digital Marketing, Corporate Comms, Service Line Marketing and Creative Services), they moved to integrated teams spanning offline and online comms.

Their success has been such that they are now taking advertisements on their platform, in order to raise income for the content department. They have also used their success to launch QD Consult - a medical education blog to healthcare professionals.

Not just about the vanity metrics

2014 saw annual traffic rise to almost 30 million and in October 2014 they hit the 3 million monthly traffic mark. They were on course to hit a 4 million month one year later.

While Amanda didn’t show us their increase in billing over the period, she did say that all their metrics were considerably up on foot of all this success and that there was no question but that their investment in content had been hugely positive. And as for that original objective of building a trusted brand at local, regional, national and international level? Well, they now rank in the Top 5 Hospitals in the country in the US News annual rankings.

Amanda, whatever they're paying you, it can't be enough!