The topic of marketing to millennials is seriously hot-button. As a millennial, it’s a particularly fun topic for me.

So many articles aren’t terribly nice about the elusive Generation Y either. There’s actually even a browser extension, ‘Millennials Begone!’ that swaps the word 'millennial' out for ‘pesky whipper-snappers’.

We're a misunderstood bunch--especially with marketers.

Stop! Hammer time! What is a millennial?

Some marketers band older Gen Z-ers in with millennials too—this is an approach I quite like as it pulls together two groups of digital natives who aren’t quite as savvy as the upcoming whipper-snappers.

How do I market to these people?

Marketers often conflate trends with being enough. Game of Thrones is hijacked everywhere because it's a thing millennials like. Hipsters get all kinds of shout-outs, even in ways that are horribly, horribly misinformed.

In 2014, the American Republican party decided to channel some of Barack’s coolness by targeting millennials. And by millennials, we mean hipsters. It was terrible—almost like a parody The Onion would have produced.

You absolutely can’t throw aside your personas and target millennials as a single entity.

But how do you get it right?

1. Do your research and know your audience

Who are you targeting and why are you targeting them? A digitally-savvy big-earning 22 year old isn’t going to want to buy a Micra just because they like cars and are young. Put a pair of hipster specs on an actor, as above, and you won’t make a Republican.

An over-use of the Moon Flower font isn’t going to make your brand cool either—but millennials don’t necessarily want cool. As with every other market, we want informative and actionable and interesting. Make us think and feel and want what you’re selling.

Easier said than done of course, but you need to know your audience and why you’re targeting them. Your marketing strategy—and your content marketing too—needs to be robust and have substance to it. Making a reference to a TV show in a clever way is fun and it’ll pique our interest, but whatever you’re selling still needs to be relevant to your audience.

2. Target social groups and not demos

A married 26 year old with a child won’t necessarily have the same interests as someone of the same age who is career-focused. Their interests will overlap in many areas but the things they’ll consume and buy will be different.

Instead of relying on exact demos, target social groups. Millennials have veered off-course from the traditional life stages: many of us are marrying older or not marrying at all; we’ve changed the definition of family too.

It all loops back round to doing your research and knowing your market.

Buzzfeed is the perfect mix of social sharing and clever content. Around since 2006, Buzzfeed is a behemoth of creativity and popular content.

Recently, I watched a webinar on marketing to millennials from Newscred and Joe Puglisi of Buzzfeed and the following stats were one of the key takeaways. Marketers—especially those working in content—aren’t so good at talking to millennials. Often, they talk at us.

The best content is almost a conversation. It communicates something to us in a way that doesn’t feel forced—that is organic and prompts us to respond, to click a call-to-action or fill in an email field or share on social. 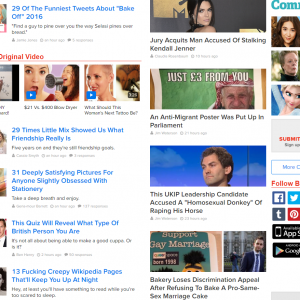 Buzzfeed is relatable and that’s why it works so well. Which leads us right onto:

As much as this applies to millennials, it’ll be even more pertinent to Gen Z. Authenticity is key. Our generations are willing to be advertised to, but it needs to be authentic and clever. We’re savvy consumers and we expect savvy advertising.

It’s part of the reason why social media for brands has taken off: it gives brands a personality, a voice, and a real human connection. We might watch Don Draper on TV, but in our real lives we want to know that real people are behind the campaigns.

5. Be on their platforms with them—but do it authentically

There are a million posts out there about using social media to market to millennials so we’re not going to dive too deeply into it. Most marketers understand Facebook and Instagram and Twitter pretty well, but there are a couple of platforms that are still on the back foot.

To be successful on social, you need to really understand how a platform works and why people consume the media they do. So what are the sleeping giants? Let’s take a look at two.

Tumblr is one of the most creative places on the internet and its userbase reflects that: mostly in the 13-34 bracket, they live and breed all things content.

Tumblr is social networking, sure, but it’s mostly a blogging site that houses millions of blog posts, poems, quotes, stories, images, GIFs, and videos. If it’s happened on TV or YouTube, it’s been giffed and analysed to death by hordes of people on Tumblr.

The nature of the beast makes it a difficult places for brands to get a foothold. Several have tried and failed. Social giant Hootsuite gave it a go to little fanfare. Tumblr has a language and culture all of its own and it can be hard for brands to tap into that.

But there are brands doing magic things on Tumblr.

Fashion brands have a unique footing as they feed into Tumblr’s aesthetic. Calvin Klein, in particular, are tapping into the youth market. On the FMCG side of things, Taco Bell and Coca Cola continue their domination.

UbyKotex, an American tampon brand (of all things), is building a huge audience by sponsoring a Canadian webseries called Carmilla. Like The Lizzie Bennet Diaries before it, the webseries has clocked up massive numbers. Where else would UbyKotex rack up millions of hits for the cost of a week of low-budget web production?

Tumblr is a difficult platform for brands to crack, but for the right brand it’s got serious potential.

Very few Irish brands have touched Snapchat. Samsung broadcasted the launch of the Galaxy S6 in association with Carphone Warehouse, but it was a quiet affair. It wasn’t widely promoted and I’d wager it didn’t bring in too many views.

The thing about Snapchat is that its audience is much smaller in brand-terms. One successful very low budget Irish Snapchat campaign was by Tech Week, a week long festival of tech.

Utilising cross-platform, Tech Week generated serious traffic for a small cost. They promoted their Snapchat on Facebook with a low-budget ad campaign based around a competition to win a camera. To win the camera, people had to add Tech Week on Snapchat and send them in a photo of their favourite tech.

Tech Week then took the Snapchat competition off Snapchat and delivered it back to Facebook. 15 finalists were chosen and their pictures were uploaded to a Facebook album. The entrant with the most likes won. Two of the entrants flew ahead, pulling in over 2,000 likes and nearly 1,000 comments between them—and all that engagement cost was €80 and a Nikon Coolpix.

Not too shabby! The campaign worked because it delivered content directly to the demo. In between tech-based content, Tech Week sent out snaps from the festival and drummed up nice levels of engagement.

While this was on a micro-scale, US and European brands are starting to do really cool stuff with Snapchat. Heinekin's SnapWho campaign is the gold standard for engaging millennials on Snapchat.

Like Buzzfeed’s Joe Puglisi said: Millennials live in the feed so meet them there.

Don’t expect them to come to you; go to them.

Content doesn’t exist in a vacuum—or at the very least it shouldn’t.

Smart content is more than just creating. As much as you need to be creating great content, you need to be pushing it out on social and email and through your PR channels.

PR outreach is no one’s idea of a fun afternoon, but it’s the distribution that’ll make all the difference to your marketing efforts.

7. Don’t be halfhearted about going mobile

You don’t even need a fancy app or the most gorgeous mobile website known to man. A lot of the time, all you need to do is get the basics right.

Millennials are driven by information and the constant pursuit of things and knowledge.

We’re constantly switched into our devices. Information and content are a constant. Our phones are never far from reach—or they’re right there in our hands. If you’re not mobile-friendly, you’ll shoot yourself in the foot.

To be great at mobile marketing, you first need to nail the basics of being mobile-friendly:

Answer ‘yes’ to all those questions and you’ve won half the battle. Create great content that works on mobile and you’ll grab the attention of plenty of millennials.

So what's the key takeaway about marketing to millennials?

Marketing to millennials doesn’t have to be nearly as hit-and-miss as it is. Be clever with your targeting and create content that is useful or emotive. You don’t need multi-million euro budgets and celebrity endorsements. You don’t even need to be cool.

For real ROI, all you need to do is know your audience, create for them, and get your content out there as widely as possible.

It doesn’t have to be rocket science. Unless you’re NASA, of course.

Are you a social celebrity or an average Joe? Let Klout tell you →