The Intercom effect: How to grow from $1-50 million Annual Recurring Revenue in 3 years

“A lot of the way we do content is a busted flush,” said John Collins, Intercom’s Director of Content, during his keynote session at yesterday’s Learn Inbound.

Underneath the blue hue of the marketing conference’s stage lights, Collins made his bold opening gambit to general agreement.

A former journalist, Collins has been instrumental to Intercom’s content marketing ecosystem – a lean, sleek output that draws in massive numbers: 200,000 pageviews a month on the blog; 40,000 listeners on the podcast; and 300,000 downloads of Intercom’s books – which are not, Collins stresses, eBooks.

It’s a following that any brand would kill for. But it’s the Annual Recurring Revenue (ARR) that’s even more impressive. After all, those numbers mean nothing without the monetary value to back them up – and Intercom’s is enviable, at $50 million.

So just how did they do it?

Collins revealed all at the mini-marketing summit.

In much the same way that eBooks are just books in Intercom HQ, content marketing is just marketing.

As a content agency, we’re not about to pull a similar coup – but the logic is sound: content marketing is marketing, full stop. In one of his more arresting points, Collins spoke about how Intercom is often asked how its staffers make time for content – but no one ever asks where busy companies find the time for design or development work.

It happens because it needs to.

Numbers like Intercom’s don’t happen by accident; they’re the product of intelligent, driven, and constant marketing. Indeed, Intercom updates its blog five or six times a week – a pattern it has followed since day one. In fact, the first 93 of 100 blogs were written by Des Traynor, one of its co-founders and Chief Strategy Officer.

It’s a top-down strategy with ultimate buy-in – which is integral to its success. 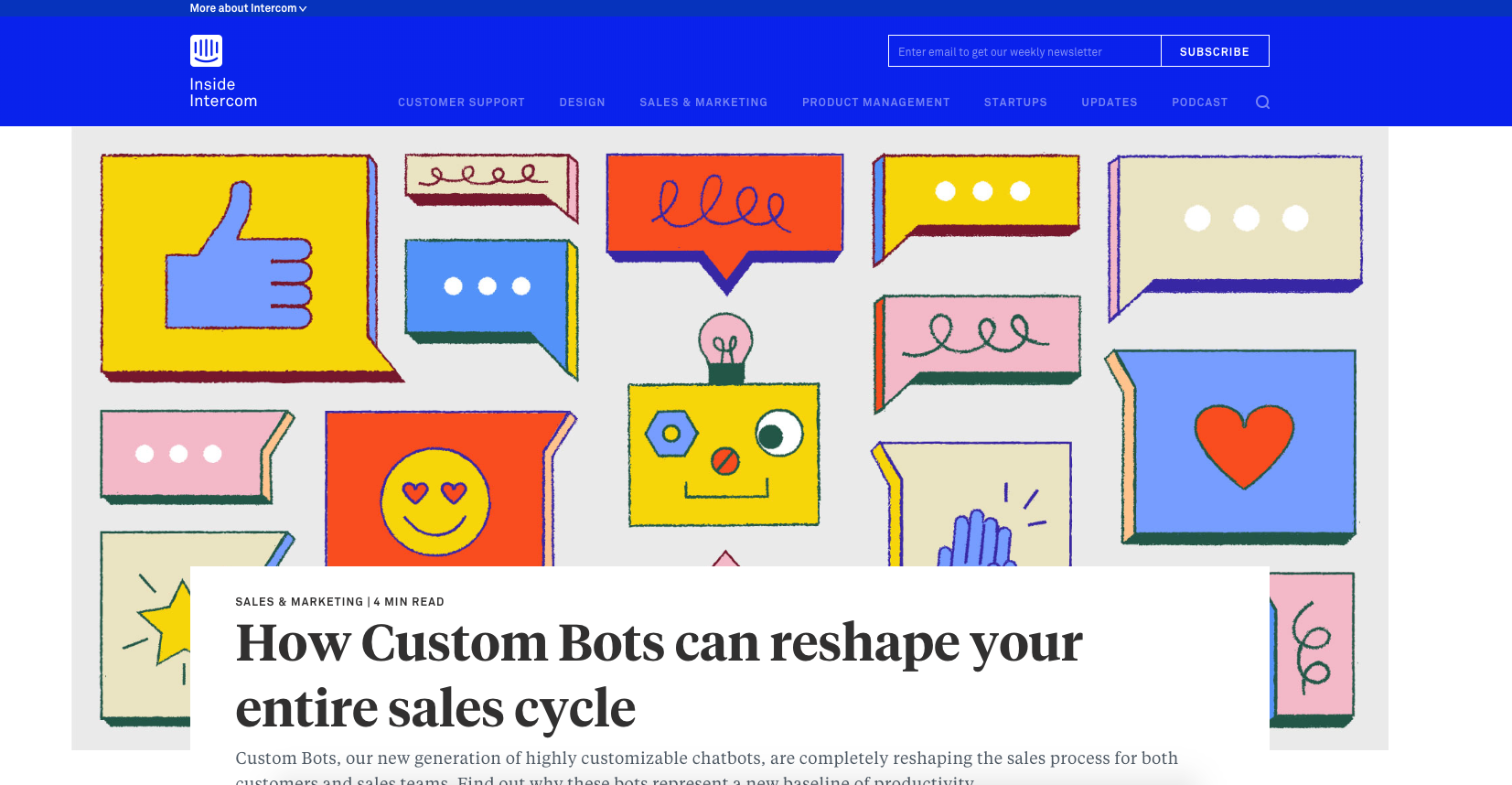 Content marketing can be contentious in its effort to sell. It’s an issue we often run into with clients who think they want content; they actually want a PR splash piece with their name and product as the centrepiece.

Your CTAs and your pushes to sell need to be earned.

It isn’t enough to write a 600-word piece that’s self-referential and slap it with CTAs and lead capture forms – especially at various stages of the funnel.

For Collins, the key is in sending the right message at the right time to the right people. His team works to see the world through the lens of Intercom as a product – but that doesn’t nullify the usefulness of the content or aim all efforts towards sales pieces.

Instead, it’s a valuable matrix of usefulness and really good writing with CTAs where relevant.

The key here is ‘relevant’.

A paraphrase of a paraphrase, but still accurate.

Ultimately, Collins said, the metrics you’ll measure will set the tone for what you’ll produce. If you’re chasing video views, it’ll obviously be video. For traffic, it might be clickbait. And on and on.

The question here, however, is worth – or value. Chasing traffic and creating clickbait might cause your charts to spike upwards and to the right, but will it actively move the needle by driving conversions?

It’s about balance and striking the line between metrics and ROI. Leads can’t be ignored – especially in tech and SaaS, where brand recognition is nice but companies live or die by subscriber count.

No one cares what us marketers thinks. It’s a point Collins was quick to stress and it’s one we’ve discussed previously: no one is putting marketers on the cover of magazines.

Companies take a misstep when they attempt to “do” content marketing, i.e. it’s a box they’re ticking for the sake of it. No one just “does” strategic meetings or group marketing or other digital activities – so treat content with the respect it deserves if it’s a tactic you’re going to fully embrace.

Top-down buy-in is imperative, though it can be difficult in a busy organisation – or if it’s a pet project for the CEO, who likes to “do” a bit of writing. Instead, play to ego and establish your higher-ups as thought leaders. 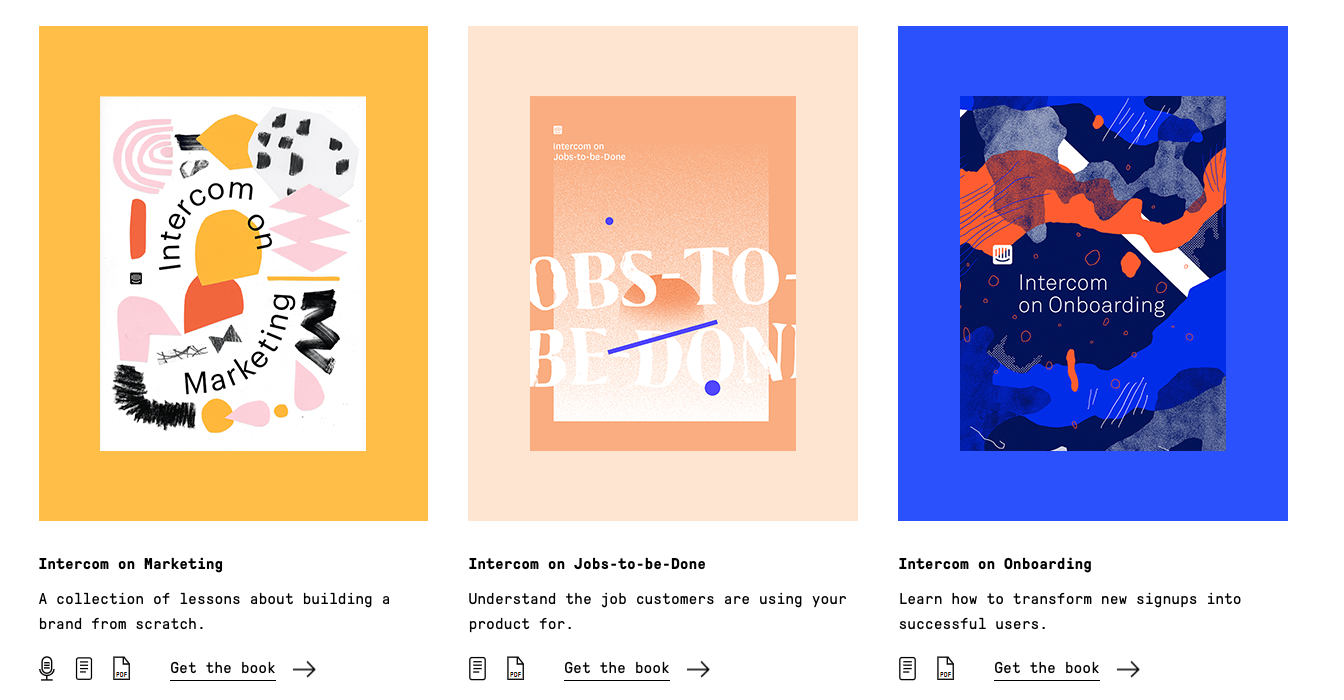 Companies often decide to give content marketing a try and they’ll create a handful of blogs in record time. While publishing a blog a day might not seem like that much work, it can be time-consuming – especially if you want to create something that actually works. That's actually good.

When determining your content frequency, you’ll need to consider the schedules of those responsible and how serious you actually are about it.

In Intercom’s early days, the onus was on publishing something every day because a newsletter was set to go out at half five on the reg.

It was a pressure cooker – but it was an incentive that worked. In that same vein, a second Intercom hack sees monthly leader boards where teams members vie for top spot.

Don’t cheap out and expect results.

While simple guides are an easy option for content creation, it’s probably already been done a boatload of times.

The internet is saturated with content – and you’re not just doing battle with competitors. You’re fighting Facebook or YouTube or whoever for attention and brain space. To win that attention, you’re going to have to create something great, so prescriptive whatever isn’t going to cut it.

8. Evergreen for the win

Newsjacking and writing the news can be effective, but the lifespan is finite. News lives and dies in the span of a cycle – often a 24-hour spin.

Evergreen grows faster and bigger and is easier to manage.

In an interesting show of piety, Intercom doesn't have dates on the vast majority of its content because it doesn’t matter.

9. Go where your customers are

You can create the greatest content in the world, but if no one can find it, it might as well not exist.

Choose your platforms wisely and play to your brand strengths. Anything else is wasted potential.

10. Multi-touch attribution is your friend

It’s rare that someone will read a blog or download an asset and immediately purchase a product. Collins used the example of a current Intercom customer who’d read the blog for three years but who’d worked for a company who wasn’t interested. He switched jobs and brought Intercom onboard.

That’s a three year conversion funnel that won’t track on any analytics platform.

Content marketing (or just marketing, if you will) is a multi-touch journey. It’s omnichannel and everywhere - a sort of omnipotent Google god.

Content works – but it’s a journey, so play to that.

Track to that. Give it space to work.

And that, ultimately, is how you’ll grow from $1 dollar ARR to $50 million.

Want to buy-in to the intercom effect?

Are you a SaaS business looking to expand like Intercom? Our free (e)Book will give you everything you need to get you there.

← Not all content marketing strategies wear capes – but they should