We need to talk about native advertising

Words are important. They have weight. They craft and mould and create. Consider the sentence: “I never said she stole my money.” Put an emphasis on each word, and the sentence has seven different meanings.

Why is that important?

Because I want you to look at the definition of native advertising with the knowledge that syntax and emphasis matters.

And here it is: Native advertising, noun: a form of paid media where the ad experience follows the natural form and function of the user experience in which it is placed.

That definition comes via Sharethrough, a modern ad platform dealing entirely in native advertising. It’s one I like because it gives substance to the ‘native’ part of the definition that seems so alien to many marketers. It’s native not because it belongs or originates on a given blog or platform, but because it takes the form of the given platform. (Usually.)

I actually prefer the term advertorial (from the old school print publishing realm), though marketers also use any of: sponsored content, branded content, native content, and native advertising. They're often interchangeable. 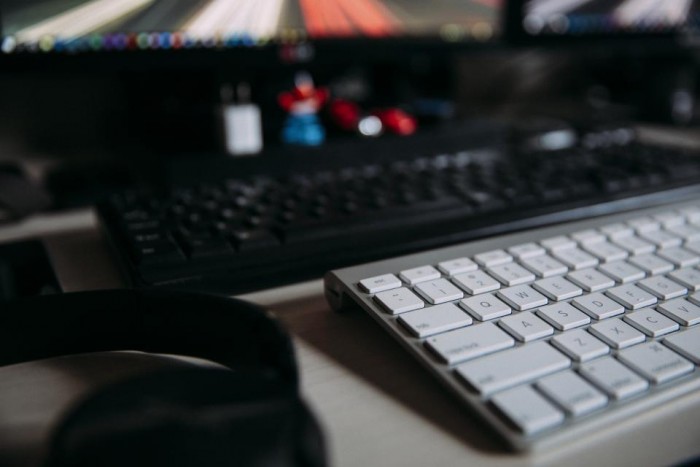 But let’s move away from the nitty-gritties of definitions

Strategic content marketing exists to catch people at a specific point in a journey. They have a problem and they need to solve it. Your content exists to solve it. Regardless of your KPIs, the end result is the same.

Sometime in the near or far future a person will think of your brand because they read your blog or saw your ad campaign or clicked on your PPC ads. Brand awareness isn’t a measure of immediate success. There is life beyond the now—beyond the immediate.

But that’s not to say all content has to be so focused. Some of it can be silly or smart or straight-up absurd. In the heart of the ridiculous is the sublime, right?

So where does native advertising come into play? And is native an element of content marketing? Or is it a separate thing and just advertising dressed up all fancy?

BUT, and it's a big but, native advertising is not content marketing.

However, native advertising is a strategy piece and content marketing tactic. It's just as viable a tactic as a social campaign or a blogging sprint or a well-timed video launched into the world.

Because here's the thing: native advertising done right can be an easy win for a client. Match a big brand with relevant content and you’ll rake in reaction, traffic, and, hopefully, leads. But not everyone is convinced--and that's where the quarrel lies.

Plenty of marketing types see native advertising as akin to product placement. Think of any of your favourite films. In Wayne’s World, Wayne and Garth eat pizza from Pizza Hut. James Bond drives an Aston Martin and sips a Heineken. E.T. snacks on Reese’s Pieces. (Fun fact: in my memory, I swore for years that E.T. ate M&Ms. He doesn’t as Mars rejected Spielberg’s request to use M&Ms. Also five-year-old me had no idea that Reese's Pieces were a thing.)

We see these brands and we remember them. Sometimes it’s subtle. Sometimes it’s not. The bad happens when a character turns to the screen to extoll the virtue of the product and it moves from placement to pitch. In many ways, native advertising is the product placement of the content world.

It can be bad. It can be good. It can be a disaster, where your favourite brand suddenly starts talking about a random product in the middle of a seemingly normal article on a site you frequent. I think it's time for examples. First up, let's look at what happened when Cadbury teamed up with DailyEdge.ie. One of their first advertorials starts with the following text:

MARTHA PLIMPTON ONCE said that she felt comfortable in the presence of oddity.

“Probably,” she added, “because I’m a bit odd myself.”

Well, we’re all comfortable in the presence of oddity here at DailyEdge.ie Towers – and we’ll leave you to draw your own conclusions about the rest.

Everything about this suggests that the article is a true native piece and not the false-native scope of an advertorial. Here, the good people of the DailyEdge will talk you through weird crap that happened in the news. The article goes on to discuss a cat-sized rat caught in a Dublin home, an Indian man who eats bricks, and the possible nuptials of Ireland’s gay penguins.

What does that have to do with Cadbury’s chocolate? Down the end of the article is the following text:

This article was brought to you by Cadbury.

Well, that was unexpected. Still in the mood for more unusual antics? Try Cadbury Dairy Milk combined with Lu and Ritz crackers, unexpected but delicious. Available in shops now. #FreeTheJoy

Note the tagline: unexpected but delicious. What, in the quoted examples from the article, meets that quota? Yum cat-sized rats. Nomnomnom gay penguins.

And therein lies the issue so many people have with native advertising:

The article drew 16,000 views--which is great. However, on a cold-ish Friday in Dublin, having read that article I now really want a Creme Egg. I might pick one up on the way home.

(Don’t worry, there is no unexpected twist here: this article most certainly isn’t sponsored by Cadbury’s. If they want in however…holla?)

The Irish Independent (henceforth called the Indo) has a more sartorial approach to native advertising with an entire section of sponsored brand content from a wide variety of brands like LIDL, Specsavers, and Bord Bía.

And how does that native content do? Solidly, by all accounts. Per Buzzsumo, the 7 most shared articles on the /storyplus domain are:

What does that tells us? 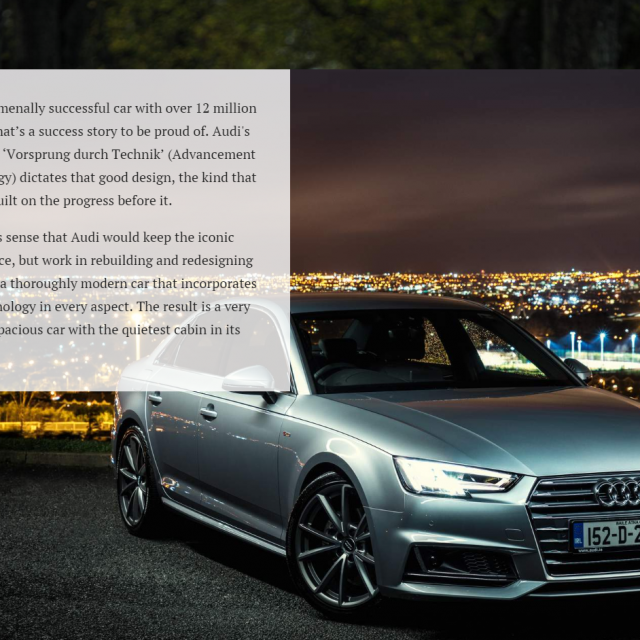 Big brands like Audi have paid big bucks to advertise on the Indo. However, while billed as such, I would say this strays from native advertising to straight-up advertising. This content is a completely different form to regular Indo content and may have been part of a larger brand takeover. 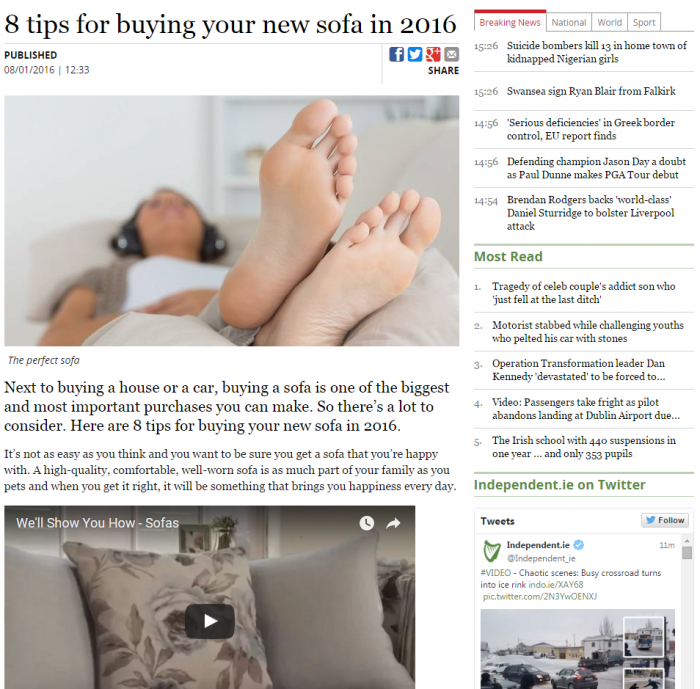 Here, Harvey Norman are pimping their sofa range. Sofa so good, right? (I’m sorry.) This is more in-line with what native is/should be: a straight article that is exactly what it says on the tin, though again it does lean very heavily on the advertising side of things as every single one of the eight points has the end-goal of sell.

That said, it does actually pass as a piece of content people might want to consume, whereas—pretty as it is—the Audi content is very much an ad. That's how the Indo does it, but how do Irish online publishers get on? The realm of online publishers certainly gets murkier.

I found this piece by Googling 'her.ie sponsored content'. It's the second part in a two-part series, revealing the results of a survey Her ran with JustEat. Nowhere in the post does the copy indicate it's an ad--and *cough* maybe *cough* it isn't--but Her might want to add a 'sponsored by' tag if they'd like to keep in line with ASAI standards. 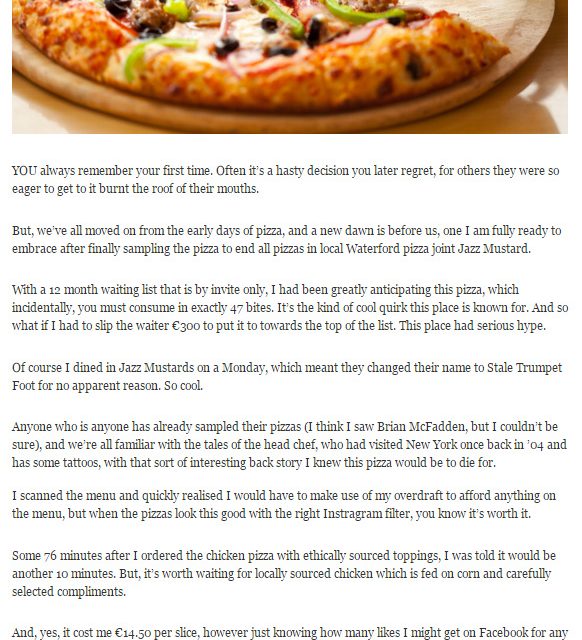 In another team-up with JustEat, banter-merchants Waterford Whispers took more than a couple of potshots at Lovin' Dublin in their satirical article about a pizza that changed the writer's life.

With 350 likes on Facebook, the reaction was pretty good, though it did generate comments from readers who weren't so chuffed with the content. Again, while we can infer this piece was sponsored by JustEat, it's lacking clarity. While that would have flown in September when the piece was published, it's a no-go now.

The very interesting thing about native ads is how they’re evolving. They’re almost an outlier in many ways, often an ad pretending not to be an ad. But let’s step away from the Irish media scene and consider the broader implication.

Look at Snapchat as a native advertiser/publisher. Look at Facebook’s Instant Articles or LinkedIn Pulse. Is this native content or outreach or something else? 21% of BuzzFeed’s traffic comes from Snapchat—or certainly it did in September 2015. BuzzFeed’s content on Snapchat meets the definition of native advertising quoted at the top of this article, as it's native to Snapchat and is essentially an ad. And there's absolutely nothing wrong with that; it's clearly an important part of their strategy.

LinkedIn Pulse articles could be considered native advertising too, as many of the articles there are often reasonably authentic content meant to bring the reader to a product or webinar or something else.

Facebook’s Instant Articles belong to a whole new category entirely as they don’t follow the native form/function of Facebook itself--though the definition might evolve again to include them.

And therein lies some of the confusion. Digital is ever-evolving. Definitions can’t be stagnant or they won’t keep up. Native advertising or advertorials or branded content means something different to many different marketers. Marketers make moulds to break them.

However, a couple of things are certain:

← 3 free tools to find and interact with your influencers

Bring your visuals to life with Visme →