Clickbait may seem like a modern phenomenon but it’s been floating around in one form or another since the 19th Century. Although presumably without any Kardashian stories. Let's just pause for a moment to imagine that perfect world.

Pioneers like Vincent Musetto blazed a trail for evocative headlines in print in later times. We’re now living in a world where online headlines are a mixture of exaggerations, half-truths, false promises and old-fashioned lies. You know the sort - “VIDEO: This guy got the shock of his life when he saw what was hiding in his backpack.” Spoiler - it’s probably his cat or a sandwich he left there two weeks ago.

Headlines have always been used to attract attention but the rules of engagement have changed. Sites aren’t necessarily selling a product or a story anymore. Publishers are motivated by page views and ad revenue - clickbait is an obvious way to hit those metrics. The headlines are now the story. Once people click on a post, it doesn’t matter what they find.

This click-obsessed world may seem miles away from content marketing but understanding the methodology and motivations involved can help you to package and sell your own content.

Upworthy is commonly regarded as the website that did more than most to feed the clickbait monster. A seminal moment in the development of this tactic involved a post starring one of our own.

In 2010, a pre-presidency Michael D Higgins delivered a smackdown to a conservative American talk show host in a radio debate. Not much came of it until 2012, when Upworthy uploaded an audio recording with the pimped-up title: “A Tea Partier Decided To Pick A Fight With A Foreign President. It Didn't Go So Well.” The post blew up and became a viral hit.

It would go on to become the site’s first million-hit story and Upworthy saw the clear benefits of using sensationalist headlines to highlight feel-good stories. Upworthy’s approach to headlines was basically to channel its inner teenager – overreact to everything and add lots of unnecessary drama.

One classic example is “His First 4 Sentences Are Interesting. The 5th Blew My Mind. And Made Me a Little Sick” (a guy discusses healthcare costs). Another humdinger is “Behold The Bluntest, Deepest, And Deadliest Graduation Speech In The History Of The Known Universe” (Avengers director Joss Whedon talks at students).

At its height, it was generating over 85million unique monthly visits back in 2013 and getting serious social shares. Upworthy also used research to work out how to promote recommended articles. Love it or hate it, it’s hard to argue with its commitment to achieving virality for its aggregated content. Earlier this year, it topped 200 million views per month on Facebook for the first time.

The site previously defended its attention-seeking headlines as a means to an end. At least the people behind it had the decency to be a bit sheepish when talking about their role in the spread of clickbait. They also claimed to have retired as clickbait ninjas.

“We sort of unleashed a monster,” admitted co-founder Peter Koechley. “Sorry for that. Sorry we kind of broke the internet last year. I'm excited going forward to say goodbye to clickbait.”

Clickbait is now everywhere and no-one is putting that genie back in the bottle. Sites like BuzzFeed have honed it into an artform and it’s a standard template for social media and other digital platforms.

Even respectable publications now routinely use the tricks of the clickbait trade in their endless chase for clicks. It’s transformed the internet into a minefield of non-stories and frustrating links that could make you question your faith in humanity.

Luckily, some comedy relief is available from parody sites like Clickhole and clickbait and headline generators.

Could you double your monthly visits using this secret recipe for success?

Some clickbait headlines are disingenuous, some are embellished versions of the truth but they all manipulate you at some level. A weird twist is that we know we’re being manipulated but we still click that link.

It’s the headline equivalent of a big red button that’s labelled “Do not touch.” You know you shouldn’t… but shortly afterwards the alarm bells are going off and you’re filled with regret and self-loathing.

One explanation is that the “information gap” between what the headline promises and delivers leads to a feeling of emotional deprivation. The “best” clickbait creates a craving that forces us to act against our better judgement and click in for closure.

That’s a pretty compelling achievement for a short line of text and an image. The same principles are now being adapted in marketing, from email subject lines to direct mailing.

One important aspect of viral clickbait is tied into emotion and this has an impact on whether people like, share or comment on a post. Clickbait relies on emotional drivers to evoke a reaction in people. It’s an area that’s worth exploring for bloggers or marketers.

Clickbait headlines are essentially super-charged calls to action to generate traffic for a site and encourage social sharing. Clickbait may not be popular but it works. From a marketing point of view, clicks are a good start but it’s all about getting people to engage. 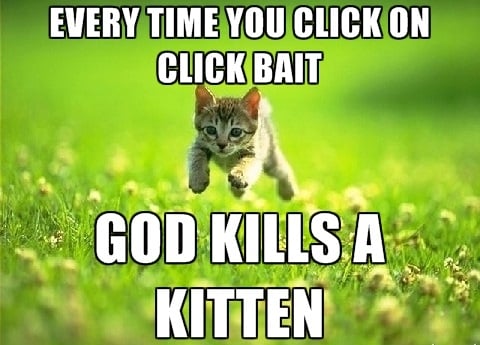 If your blogpost is titled “Check out our latest product,” you can probably put that product back into storage. Because no-one will see it after reading that title. When writing headlines, use strong adjectives and give it a unique selling point. Trigger words like “what”, “why”, “when” or “how” give it some added conviction. Check out our Headline Generator for some inspiration.

There’s a theory that we’re drawn to lists because we’re afraid to die. Eh, ok!? That’s a bit of a head scratcher but one thing you can’t dispute is that listicles work. Just ask BuzzFeed. Headlines with numbers in the title also stand out – particularly odd numbers. These types of articles promise a set amount of information in an easily-scanned article, which automatically appeals to digital readers.

Clickbait headlines are liberal in their use of “you” to draw people in. The content is also relatable. They focus on how the story will make you feel and on your emotional response. Think about how your headline should make the reader feel and address them directly to make them feel included and engaged. Don’t be afraid to use sentiment or emotion to sell content.

Exploiting the curiosity gap means uses some of the same psychology as clickbait. Tease readers by providing just enough information to make them curious. This forces them to click into the link to find out more. Be imaginative! An enticing headline can hook them but compelling content will keep them coming back.

Use your social channels

Social media is the preferred delivery method for clickbait articles for good reason. You’ve a captive audience who will lap up short, easily digestible articles. If clickbait has killed responsible journalism, social media is the smoking gun. It’s an invaluable weapon to have in your content arsenal.

Being smart about the way you package your social media isn’t cheating. There’s no rule against making a post seriously engaging – just make sure you have some killer content to back it up. See what clickbait approaches work best for the medium and apply the lessons to your own content.

Use a yeti picture

Ok, so we don’t mean that you should literally use a yeti picture. Although if you have one, be our guest… The point is that people are drawn to things that are strange, unbelievable, new or weird. Find a fresh angle or an original take to use in your content. Come up with something that you couldn’t resist to bring out the same reaction in other people.

Want to make the greatest content known to mankind?

Okay, okay - so we may have got carried away with the whole clickbait approach. But we do make great content and we have the awards to prove it. You can get in touch if you want to make content that people can’t ignore or if you need to talk about content marketing.

← Size up the competition with SimilarWeb

Send files with no size limit with Smash →