1980s Ireland was a bit grim on the content front: How to Drive Your Man Wild in Bed was kaiboshed in 1985 (it’s still on the naughty list, FYI); Abortion: Our Struggle for Control got placed on the banned list in 1983; and Playboy didn’t come in out of the cold until 1996.

Unless you were lucky enough to have cable TV, Sunday in your gaff was likely to be something along these lines: mass; no shops open; Sunday dinner; boredom; Glenroe (to catch up on the goings on of Miley and Biddy et al, whether you liked it or not).

Then, a horrible feeling of impending, crushing doom would descend because you knew you had school tomorrow and you hadn't finished your maths homework...

Push the rote out

One TV was mostly the norm, and it lived in the family sitting room. There was very little personal control over what we consumed 30 years ago too – okay, so once video recorders became the norm you could save programmes for later viewing, but that was about the extent of your consumer choice.

You didn't have options for multi-room viewing, rewinding of the news to see That Guy Slipping On The Ice so he could become an instant meme-slash-legend, or have the ability to stream content to your phone on the bus. You definitely didn’t get to screen stack so you could sarcastically tweet your way through the latest cringetastic episode of First Dates.

Big Brother – aka RTÉ and the BBC – told you what to watch and when, and you duly interrupted or planned your life around that. TV was a family affair, because the method dictated that it had to be.

In other words, content was pushed to you, and you consumed it with very few questions asked or choices given. 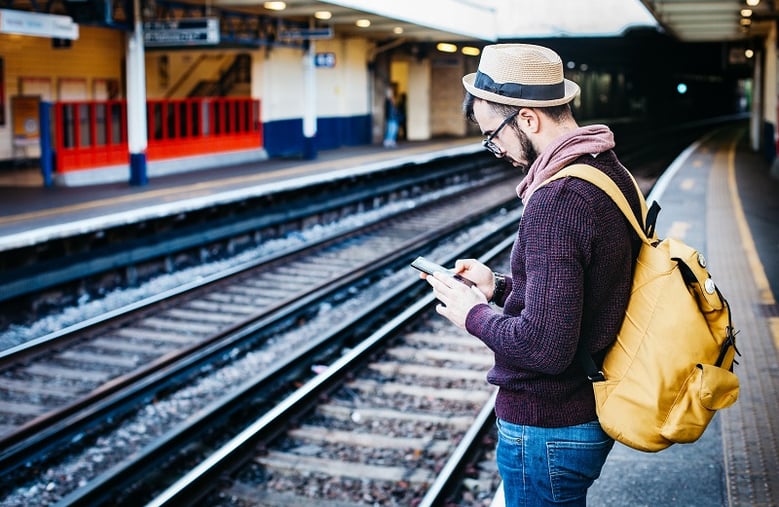 Now? Well, we still can't do much about the Sunday Fear, but how we consume content in 2017 has utterly changed from the 1980s model.

Eir's fourth household sentiment survey from 2014 revealed that the average number of potential online on-the-go devices in the Irish home is now four, with an average of six for 16-to-24-year-olds. Children as young as 10 are getting their voices heard with regards to the broadband choice and the range of TV stations and TV service provider chosen at home.

We're consuming and streaming more as we go, too. Two thirds of commuters are using digital devices on public transport, and practically all of the student cohort are too. 60 percent use it to keep up on news, 53 percent for social media, 45 percent for relaxation and only 29 percent for work-related reasons.

Melrona Kirrane, a professor of organisational psychology at DCU, told The Irish Times that Irish millennials were, “more educated but spend more than six times the number of hours watching TV and playing video games than they do reading books.”

So where content used to be pushed to us, now we pull it from wherever we choose. And there are a heaping tonne of sources: there were 332.8 million Tumblr blog accounts at the end of 2016, hundreds of terrestrial and digital TV channels and 2.2 million Irish users on Facebook all generating their own stuff day in, day out.

According to Ipsos MRBI’s Social Networking and Social Messaging trackers for January 2017, 28 percent of the population use Instagram and a further 29 percent are using Snapchat.

That’s a lot of content to consume, and unsurprisingly, millennials - so used to having multiple media strands at the end of a screen - aren’t that loyal to any particular one. According to Nielsen’s Q4 2015 Total Audience Report, they don’t have a uniform media palate. Instead, the body discovered that this 18-to-34 grouping, in rapid transition, can be broken down into three segments:

The first grouping is the youngest and is more likely to subscribe to video-on-demand services like Netflix, whereas the starting a family grouping, which is over 30, consumes its content differently, watching a lot more live TV per day. 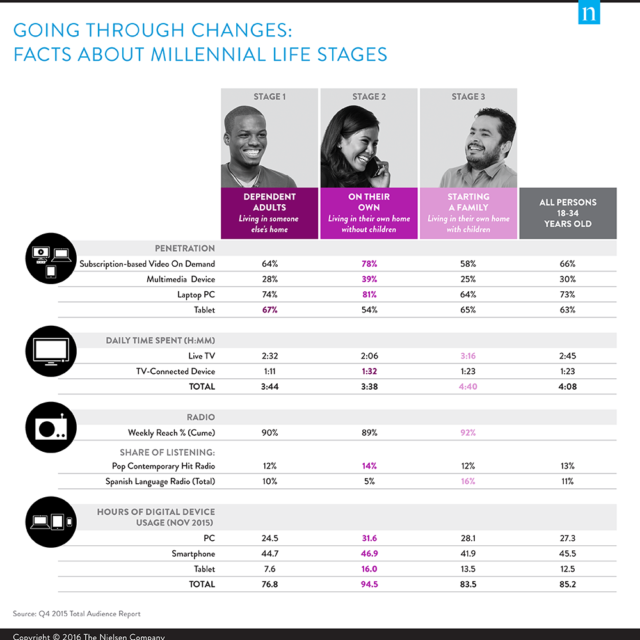 Social media has had an enormous impact on how millennials get their news. The American Press Institute ran a survey in 2015 to delve into the habits of this generation. The takeaway was that social media was their news source, making it more about the newsfeed, and less about the broadsheet of yore.

85 percent said, “keeping up with the news is at least somewhat important,” while 69 percent, “get news daily.” 45 percent, “regularly follow five or more ‘hard news’ topics."

A UK McKinsey study discovered that under 35s consume 72 minutes of news per day, compared to 60 minutes in 2006. They read widely too, consuming blogs and checking in on topics that interest them, and they do read books – in 2014 in the US, 37 percent of adults between 18 and 29 were reported to have read an eBook in the past year.

As a side-effect of all the content millennials consume, social media has had other, more nefarious effects. Sure, we may have been bored in 1980s Ireland with only Wanderly Wagon and the Stations of The Cross to entertain us, but for millennials, locus of control and mental health are a hot button topics.

We knew a lot less about what went on in the world before the 24-hour news cycle, endless push notifications, and bragging rights-style #InstaLife posts, all of which allowed us to feel we had a lot more control over our own destinies and were responsible for our own success.

Now, social media allows users to utterly distort the realities of their lives by presenting an edited, shiny package that doesn’t necessarily reflect the mundanities we all face. For a younger cohort, this can lead to negative thinking, as a study at Lancaster University explored.

Okay, so you kinda already knew that, but the effect is a generation who don’t feel they have a locus of control. "College students tend to blame others more, are less likely to take responsibility, and are taking a more passive role in life. They often view themselves as powerless and want to be pushed and encouraged by their families, bosses, and mentors. Continual feedback is critical,” according to Michael Seaver.

It all rounds back to content for these digital natives. 58 percent prefer to watch online videos over cable TV, and one third of their total TV time is dedicated to online sources. They binge-watch, and they love their smartphones: 31 percent are happy watching video on a smartphone - and they’ll share it on their social media if it meets their approval.

The message is clear: millennials, a larger cohort than both Generation X and Baby Boomers, are members of the sharing economy, broker than their parents, and interested in using the proliferation of content at their fingertips to fuel their lives, say Goldman Sachs.

Their affinity for technology helps shape how and what they buy, and they’re used to being spoon-fed price comparisons, product information and reviews.

So, if you want to market to them, you better find out how to talk to them, quick-sharp. And your content better be whip-smart, too.

How voice search is the new frontier of content marketing →