The Lions' content is boring as hell... but they're winning fans

So, the Lions squad was named today. Ireland have 12 representatives in the 41-man squad. It’s not Ireland’s strongest showing – that came in 2009 when 16 Irish players boarded the plane but it’s a far cry from the dark days of the 90s when Ireland’s representatives were in the single figures (four in 1993 and 1997). Obviously, here at 256, we are a content agency so we're going to look at the Lions' content but there are a few more stats we can look at first.

Regardless of what happens on the pitch in New Zealand – one aspect of the tour is guaranteed to be a success – and that’s the amount of revenue the tour will generate. It seems almost quaint that until 1991, the Lions tours never turned a profit. So, how much money will the Lions make in New Zealand 2017?

Percentage of players from each country since 1997

Back in those amateur days it was seen as something of a philanthropic mission; a way for the good old boys to tour the world and spread the gospel of the game while they were at it.

Nowadays, things have changed. The Lions will take to the pitch with Standard Life emblazoned across their chests. The last tour in 2013 was meant to have cost Standard Life €8.5 million so this one is not going to have been any cheaper.

From a marketing point of view, the squad announcement got off to a somewhat shaky start with BT - who are the broadcaster for the tour in the UK and Ireland - tweeting an image of Britain and Northern Ireland - leaving the Republic out of the equation altogether. BT were forced to delete the tweet and their mishap was covered extensively in Ireland and further afield. 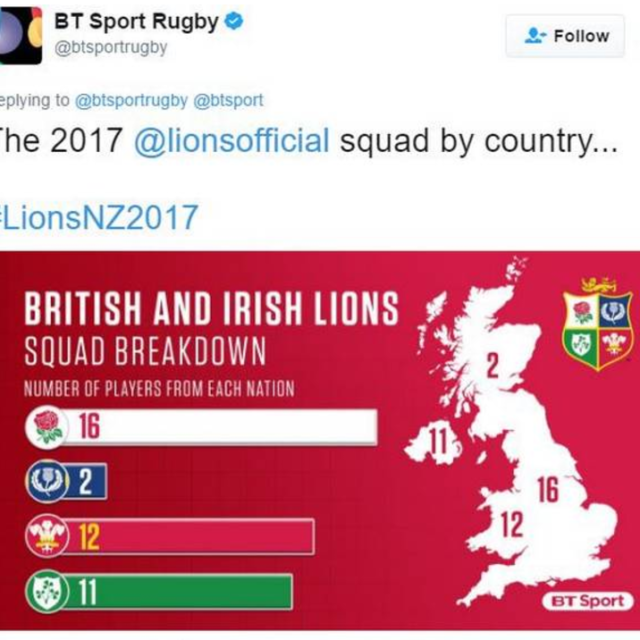 The first Lions tour in 1997 was the first tour after rugby turned professional in 1995 and was notable from a content point of view because of the "Living with the Lions" documentary. Behind-the-scenes documentaries were commonplace in the US at the time - but it was one of the first times the notion was tried on this side of the pond. The reaction was huge - and more and more documentaries have followed since.

This year, the focus has moved more online and the Lions efforts are pretty decent to be fair. Their Facebook page has racked up over 450,000 likes and their digital efforts include a 'Join the Pride' newsletter, a dedicated app and Lions TV. The Lions' content on these channels has loads of your standard slow-mo, us-against-the-world montages and some pretty boring corporate stuff, but it's early days yet.

The Lions Twitter page already has more than 355,000 followers which is a miracle as it is one of the blandest accounts on all of the internet. The highlight yesterday was a quote from Lions captain Sam Warburton saying "You can learn a lot from players from not just playing with them, but being in their company, being on tour" which is one of those sentences where you learn less the further it goes on.

CJ Stander, the South African-born Irish flanker took to Twitter to say "A massive thank you to those who congratulated me on my inclusion in the @lionsofficial squad." When the gurus in charge of the Lions Twitter account saw that, they sprung into action to retweet it because when social media gold like that comes out; speed is of the essence.

As with the Living with the Lions documentary, the real character in these pieces will come along once the players and coaches actually get on the plane and start interacting with each other and the Lions media team. Right now the Lions' content is pretty formulaic but (hopefully) that will change once the tour gets going.

The other sponsors include the sportswear firm Canterbury, Gilette, Land Rover, Ernst and Young and Quantas airlines. Those are blue-chip sponsors and take their place alongside a whole host of sub-sponsors like Doom Bar Beer and Whyte and Mackay whiskey. It would seem a safe enough estimate that the commercial sponsors would rack up around €20 million between them.

Where the players came from in the last six Tours.

And that’s before the extras kick in. If you wanted to spend 42 nights in New Zealand following the team around – a package with the official Lions' tour could end up costing you €18,852. (There are some cheaper options available too, but even if you want to go for one game – the cheapest option is €3,161.)

Indeed, securing accomodation in New Zealand is proving so prohibitively expensive that a Facebook page where ordinary New Zealanders offer to "Adopt a Lion" has been created letting Lions' fans stay in their homes for free.

And the bonanza the Lions will experience is handed down to the players too. Every player who finishes the series is guaranteed a cool €83,000 – and that’s before the potential bonuses for winning Test matches comes into play. That's in addition to their wages from clubs or countries already (which emerged yesterday via the42.ie is €346,000 a year each for the Lions and €302,000 each for the All Blacks).

New Zealand officials are rolling out the red carpet for the tourists – as well they might. The last Lions tour to Australia in 2013 was worth €45 million to the Australian rugby authorities. 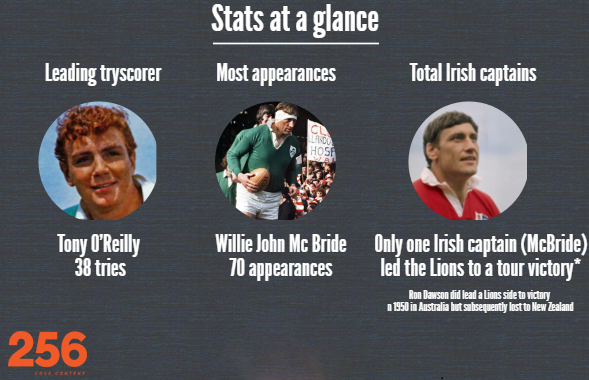