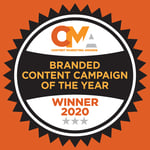 Irish Life is one of the most prominent life assurance and pensions companies in Ireland. Using data gathered internally, its Corporate Business division wanted to showcase that the gender pay gap is turning into a gender pension gap.

In 2019, Irish Life worked with 256 to bring what would come to be known as the ‘In Search of Pension Parity’ report from concept to execution. The overarching objective was to bring awareness to the topic in a way that makes people notice and talk about it.

Solution:
After brainstorming the campaign behind the report, 256 worked with the raw data to put pen to page in all its glory. The Pension Parity report was then put through design, where 256’s studio came up with an original template that helped it stand out, yet still meet brand guidelines.

At the same time, 256 had an idea of how it could help the report break through the white noise: a ranging digital campaign that featured video, a mix of engaging and experiential social media assets, blogs, infozines and a landing page hub to pull it all together.

The video would help guide the design for everything else, but it wouldn’t be your run of the mill video – it needed a theme that properly relayed how ridiculous the findings of the report were.

The fact that women saw pensions that were 22% less than their male counterparts is incredibly outlandish. 256 could only help but think: it’s like women not being able to have something as simple as a 99, as if to say they could only have a 77.

With a script, a van, a few flakes and a day to film, 256 was able to show just how ridiculous the thought that women deserved less was with reactions from men, women and children alike.

The video, Not All 99s Are Equal, was then promoted via a paid social campaign on LinkedIn, Twitter and YouTube. The report and video were also featured on press channels like the Irish Times.

Results:
The campaign used both print and visual components to engage with the target audiences, which included both the general public as well as high-value prospects identified by Irish Life via account-based marketing.

With a budget nearly eight times smaller than LinkedIn, paid social on Twitter was able to garner 54,981 video views and 4,219 engagements. It netted a CPC of under €0.50, too.

Overall, the campaign was a massive success. The report led to a video that quickly became a hot topic of conversation. The paid social behind it pushed the reach of the campaign to a far greater area than it would have with an organic release.

“The team 256 are absolutely AMAZING to work with.

Creatively they are second to none, offering an endless stream of inspiration and ideas.

They also bring seemingly insatiable energy and world class expertise to everything they do with us, and the profound effect this has had on our shared projects simply cannot be articulated.

But aside from their dynamism and unquestionable content marketing capability, they also offer some very valuable qualities that many agencies do not:

Basically 256 are a joy to work with. They get the job done, spectacularly… Every. Single. Time.”

How can we help you get great content results?

If you’ve made it this far, thank you. You may be exploring an investment in content marketing and are unsure about ROI or attribution. You may have a content programme that is underperforming or a chaotic multi-channel content ecosystem that needs an overhaul.

If that sounds good to you and you’d like to have a chat, just fill in the form or give us a call!